We were given a png

This one was a tough one. We worked a lot.

First we had to install some weird software named stegsolve.jar. After some research, we discovered something very interesting here : jar is a file format !

So we decided to find out how we could open it. In fact, there is something called java that could help us.

After some time understanding how this software worked, we clicked on “file” then “open” and finally we found our png file from the description (took some time, lot of files in this FS). But now what ?

We had to draaaag the mouse, all over the screen and we made some monkey testing, clicking all over the picture, menus and stuff.

Then we decided to fuzz it but by some miraculous chance, someone clicked on the arrows in the bottom of the software (I don’t think any normal human being would have thought about that, we were so lucky…). 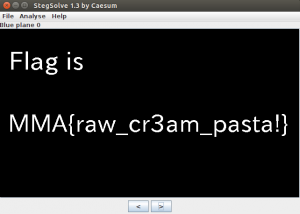